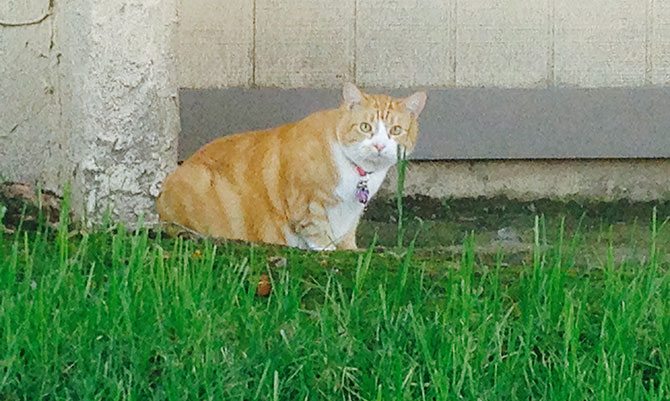 On my way to my local juicer, I encountered this cat, which I named the “Zen Cat.”   On my walks, I often see many cats in my neighborhood, but a little voice in my head told me to stop for this cat.  In a moment of psychic and telepathic wonder, my eyes just simply locked onto the cat’s eyes, which was so intense with mesmerizing powers. I knew the cat was reading into my soul.  I lowered my body to a squat position and quickly took a picture.  Once our stare was leveled and energies fully connected,  I closed my eyes to meditate on the cat, visualizing it to approach me.

As a mental command, I focused intently for like 5 minutes.  As the cat would not move yet had its eyes so fixated on me, I was disappointed that it would not come closer.  When I stood up, the cat also stood up, mirroring my movements.  In her standing position, I could see the cat was pregnant, appearing to be in its full term of delivery.  As the mother cat was protecting her soon-to-be born litters, I realized why the cat had not approached me.   As I started to walk away, the cat’s gaze just followed my path, and I blessed the cat and its litters, thanking the Universe for such a magical moment.

Animals and nature are so precious because they live in their highest light of Being.  Because they do not have any ego (unlike humans), they are the highest expression of pure soul and truth, so when humans connect with animals or nature, we tap into with our own truth, light and Source.

For some reason, I knew the Universe wanted me to connect with the soul of this Zen Cat, and in reflecting this enchanted encounter, I realized that the cat’s impending role as a mother was God’s  message to me and everyone that we should always respect Mother Earth and treat it with kindness.

God  has given us such wondrous and spiritual animals on this planet to help us tap into our own light of Being.  As the cat was the epitome of Zen and divine wisdom, The Zen Cat truly brought me to my Zen Moment…